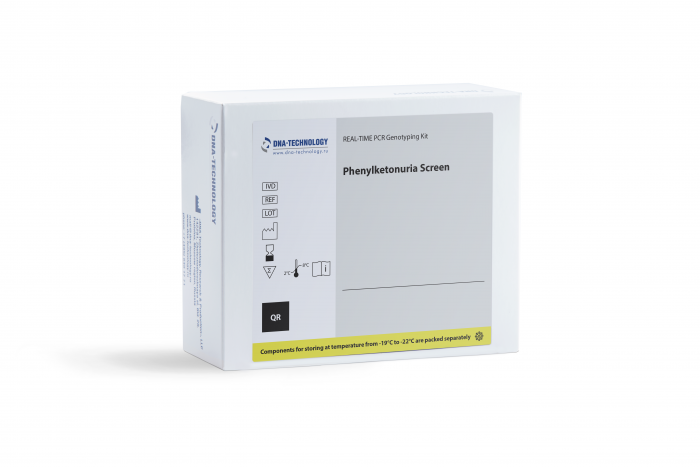 Phenylketonuria – is a hereditary disease associated with a violation of the metabolism of amino acids, mainly phenylalanine. Without proper therapy Phenylketonuria is accompanied by the accumulation of phenylalanine and its toxic products in the body, which leads to severe damage to the central nervous system and impaired mental development. The disease is associated with mutations in the PAH gene coding for phenylalanine hydroxylase. The gene is localized on the long arm of the chromosome 12.

The screening allows timely detection of the disease, to begin treatment and thereby prevent pathological changes in the central nervous system in children with PKU. The blood for screening is taken from the newborn’s heel, and the level of phenylalanine (PA) is determined in the laboratory. If the level of PA is high, additional studies are performed to confirm the PKU. The last step in refining classical phenylketonuria is molecular genetic diagnosis. In this regard, laboratories which perform neonatal screening for PKU need kits to detect frequent mutations in the PAH gene.

• in a complex of diagnostic methods for the formulation or verification of the Phenylketonuria diagnosis;

• for preimplantation and prenatal diagnostics of Phenylketonuria with known mutations in the proband, parents of the proband;

• definition of carriers of mutations among relatives of patients with Phenylketonuria in case planning pregnancy;

• as part of a complex of measures during pregnancy planning, especially in cases of marriage between relatives.

Phenylketonuria Screen REAL-TIME PCR Genotyping Kit is intended for detection of the 4 most common genetic polymorphisms associated with inherited risk of phenylketonuria.