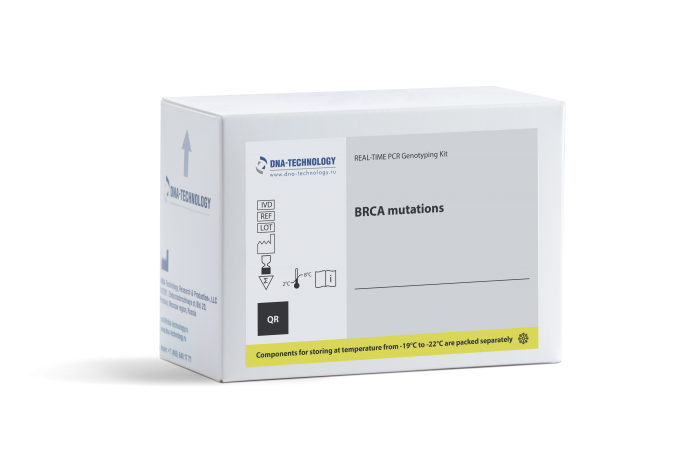 Cancer is a major social and health problem because of high incidence and mortality. Moreover, it is obvious that the effectiveness of cancer treatment is higher in the early stages of the disease. Therefore, timely diagnosis is an urgent task and it helps to significantly reduce mortality rates.

It is known that oncological diseases are hereditary in significant percentage of cases and they are associated with carriage of mutations in certain genes received from one parent. Carriage of oncogenic mutations is widespread and they are found in 1-2 % of people in all populations.

Class I (High-penetrance) mutations are rare in the general population, but have high penetrance. Example: BRCA1 and BRCA2 gene mutations in patients with breast cancer and/or ovarian cancer. About 50-70 % of inherited cases of such cancer are caused by mutations in one of these genes (often BRCA1).

BRCA1 and BRCA2 genes encode ubiquitously expressed nuclear proteins. It is estimated that the function of these proteins involves regulation of DNA repair and maintenance of genome integrity. Families carrying BRCA1 and BRCA2 mutations show autosomal dominant inheritance of tumors.

DNA-Technology, together with the Blokhin Russian Cancer Research Centre, conducted joint research to determine the incidence of 11 previously described BRCA1 and BRCA2 gene mutations in an unselected sample of breast cancer patients in the Russian population on sampling of 1091 people. Based on the results of this study, a kit was developed for determining polymorphisms associated with the risk of developing breast and ovarian cancer by real-time PCR method